What an absolute delight! Reaching back in time, A New World, the first book in the ‘Carly Mills Pioneer Girl’ series, invites young readers to discover the story of one of Australia’s greatest humanitarians, Caroline Chisholm, through the eyes of Carly Mills, a young, and sometimes, brave adventurer. As a teacher of young women for over 30 years, I recommend Carly Mills as a heroic character who will inspire young readers, especially girls like Carly, to be curious and ready for action at a moment’s notice.
Kathi-Ann Hill, English and Japanese teacher

Ship of Death: the Tragedy of the Emigrant - NOW AVAILABLE!
A vivid, beautifully researched account of a human tragedy told with compassion and an eye for novelistic detail.
Thanks to Smith, the story of the Emigrant, its passengers and crew, and the selfless doctors who sought to save them will live on. If I felt my heart breaking as I read this, I also found myself feeling deeply inspired and grateful for their lives, and for the story that honors them.
- Amazon
Click here to find out more about the tragedy of the Emigrant at the website devoted to the story.
Captain Starlight: the Strange but True Story of a Bushranger, Impostor and Murderer 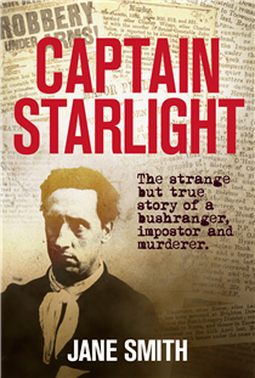 Perth, 1899: a respected public servant mistakes a bottle of cyanide for his heart medicine, swallows it and dies. Months later on the other side of the country, a prisoner of Pentridge gaol with the same name as the deceased reads of the inquest with alarm. He writes to the coroner with his suspicions: the supposedly upstanding government accountant was an impostor – an ex-con – who had stolen his identity and deceived people at the highest level.
​
The claims sent the authorities into a spin; who really was the deceased? Was it possible he was the bushranger known as ‘Captain Starlight’ who, thirty years earlier, had callously murdered a policeman and been sentenced to hang? How had he pulled off the subterfuge and what other secrets remained hidden?As the investigation unfolds, the remarkable life and crimes of Captain Starlight, committed across four states of Australia under countless aliases, are revealed.

Author Jane Smith’s meticulous research reveals the stranger than fiction story of a compulsive liar and serial imposter: a doctor, a stockman and an accountant – and a bushranger, forger, con-man and killer. It is a true story of murder and deceit that reveals new information and presents, for the first time, a theory as to the real identity of the bushranger known as ‘Captain Starlight’.

‘What a phenomenal true crime/who-dunnit!... It's an amazing true story of lies, deception, and surprising twists you won't forget!’
– Karen Dustman, Goodreads.
The Story of the Swamp: a Children's History of Toowoomba

Written for primary school age children, ‘The Story of the Swamp’ chronicles the history of Toowoomba and features maps, newspaper clippings, photographs and a glossary.